No started working at the Jazzfest Vienna this year. First was a Gig for 5k+ people at the Fernwärme Wien, Viennas main waste incineration plant that produces heat for over 200,000 households. You can see pictures of the enormous waste-storage cavern below. That was pretty spooky.

The stage location there was terrible, with one of the PA wings directly facing a massive steel and concrete wall just some 22m away, while the other PA wing adresses all of the 58m of audience basically alone.

I made use of the asymmetry in my PA design, aiming one side of the flown 8 MILOs just at the first 20m. The other side went the whole nine yards, with delay reinforcement of 6 M’elody after 25m. Much too short, but I wasn’t allowed any input into the stage and dealy tower planning, so I had to make the best out of a given situation. Still, the delay towers after 25m and just 4m high meant some rather bumpy coverage.

What went well was setting subs (2 times 4 700 HP) up in end-fired long-throw mode, that really fit very very well to the long-drawn narrow shape of the audience.

The people started coming in to see Viennese Soul/Funk superband Count Basic, who played at 36°C with 80{bebb06f271259ca942a7887f5eb25673b4b02ba69cbc6ed6f7a39064dc6657a8} humidity and sunlight directly into their faces. The stage got so hot, that lead vocalist Kelly Sae’s UM1P monitors shut down due to thermal overheating! The audience gathered in the shadow, populating a long and narrow strip, on the opposite side of the far-facing PA (duh!).

Now we are at the Vienna Staatsoper, one of the most famous opera houses in the world. I do monitors here, with Ronald Matky of Vienna Sound doing PA and FOH. PA here evolved during the last years. We’re extremely happy with a setup of 2 MSL4s with one 700HP per side for floor and first 2 balconies and 6 M’elodie per side for the upper 4 balconies. A MeyerSound Galileo controls everything,one PM5D for Mon and one for FOH. If the PA seems a little petite, please remember that we are in an opera house with supreme natural acoustics!

I love working in this building, which consists of an intricate maze of hallways and rooms, with a stage behind the stage that is some 30m high, and can be hydraulically lowered up to 20m deep! It really is a very special place. See some pics below and keep tuned for updates. 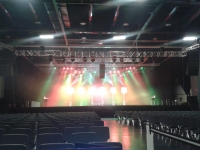